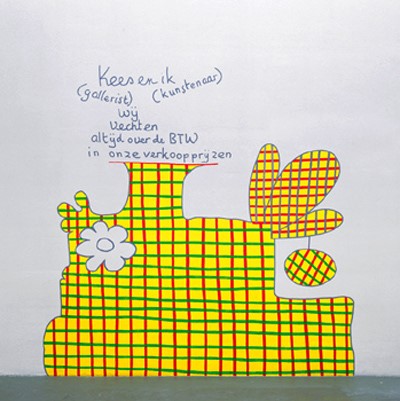 The visual repertoire of Dutch artist Lily van der Stokker includes flowers, looping lines, clouds and curlicues in bold and bright colors, raising questions about what we regard as typical ‘feminine’ or ‘girly’. Her murals, drawings and paintings can be situated in the tradition of feminist art, countering prevailing standards of good taste. As such, she often exploits the frivolous and the decorative, categories usually ‘banned’ from contemporary art. Van der Stokker: ‘I am a beauty specialist. I have commissioned myself to research happiness and friendliness in my artwork, and with that I take a stand against irony and cynicism’. Lily van der Stokker ran a gallery in New York in the 1980s. She received international acclaim with numerous exhibitions worldwide. Major recent soloshows were held at the Stedelijk Museum (Amsterdam, 2018-2019), Hammer Museum (Los Angeles, 2015), New Museum (New York, 2013) and Tate St. Ives (2010). The artist is represented by Kaufmann Repetto (New York/Milan), Air de Paris (Paris) and Galerie Van Gelder (Amsterdam).