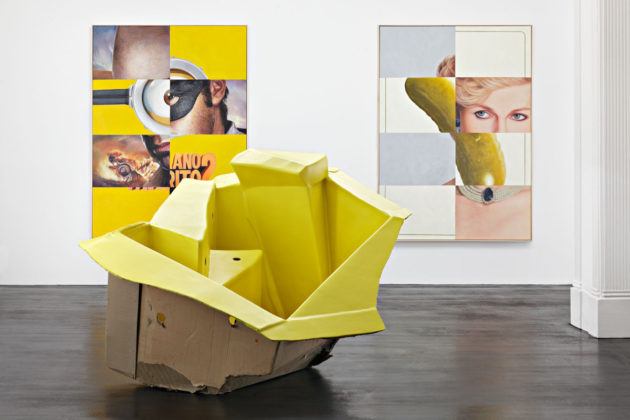 Since the early 1990s, American artist Mike Bouchet has been questioning social-political issues in a variety of media, including large scale sculptures, paintings and installations. His artistic practice focuses on the effects of images and the desires they produce, dealing with topics such as ownership, consumer trends, outsourcing, yet also with his own role as an artist. “You cannot alter your place in the world without first altering your image of the world,” the artist says. Bouchet had major solo shows in Carl Kostyal (Stockholm, 2015), The Box (Los Angeles, 2013), Cobra Museum (Amstelveen, 2010) and Schirn Kunsthalle (Frankfurt, 2010). With his former teacher Paul McCarthy, he collaborated on a show in Portikus (Frankfurt, 2014). He participated in Manifesta 11 (Zurich, 2016) and biennales in Montréal (2016), Sao Paulo (2012), Venice (2009), Moscow (2007) and Berlin (2006). He is represented by Marlborough Chelsea (New York), Parisa Kind (Frankfurt) and Peres Projects (Berlin/Los Angeles).